By Doug Kennedy
The Wolves bounced back in Clinton last Friday with a 7-2 win.
Ben Hughes led the way with three goals and Brett Catto had a pair, along with singles going to Brent Walton and Dan Nicoloff. Ryan MacDonald picked up the win in net.
On Sunday afternoon in Ripley, it was a different story as Clinton dominated in a 5-2 win. MacDonald kept it close as Clinton was in full gear. The Radars hardly allowed any scoring chances for the Wolves in the first two periods. Nicoloff and Pat Looby scored for the Wolves.
Game five will be played in Clinton on Friday night at 8 p.m., and hopefully game six will be played on Saturday afternoon in Ripley at 3 p.m. 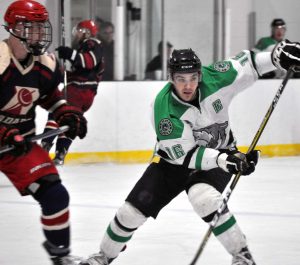 Wolves hang on with win in Clinton was last modified: April 2nd, 2019 by Barb McKay