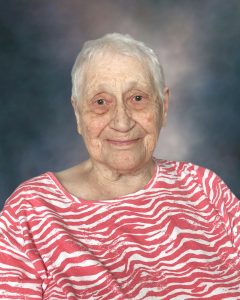 Sophie Schneyderberg (Hoogland) passed away peacefully, with grace and dignity, on Sunday, Feb. 16, 2020, at the age of 98.

She was under the kind and capable care of Kincardine Hospital’s Palliative Care unit, having spent the years since Tony’s passing, in the comfortable care of Tiverton Park Manor.

Survived by her sisters Theresa, in Saskatoon and Maria, in Holland.

Born on November 18, 1921, in Voorburg, Holland, Sophie was seven months pregnant when Tony sailed to Canada to prepare the way for her. Sophie, along with her newborn and two other children, followed shortly after to Stratford, Ontario in 1953, where she set up house for Tony and their three, then four, then five children. Upon retirement Tony and Sophie toured “this great country” from coast to coast. In 1997 Tony and Sophie moved to Kincardine where they enjoyed daily walks by the lake, and where Sophie swam marathons in the local pool twice a week, well into her 90s.

Visitation was held at the Davey-Linklater Funeral Home, Kincardine on Friday, Feb. 21, 2020 from 5:00 p.m. to 8:00 p.m. The Mass of Christian Burial took place at St. Anthony of Padua Roman Catholic Church, Kincardine on Saturday, Feb. 22, 2020 at 11:00 a.m., with Father Thomas Manninezhath officiating. Interment followed at the Kincardine Cemetery.

Memorial donations to the Canadian Cancer Society would be appreciated as expressions of sympathy. Portrait and memorial online at www.daveylinklaterfuneralhome.com