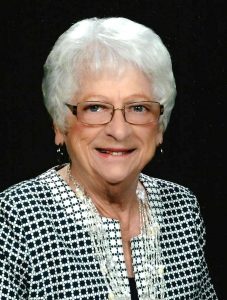 Shirley Dolores Ferguson (née Roberts) passed away suddenly and unexpectedly at the Kincardine hospital, with friends and family by her side, on Wednesday, Sept. 30, 2020. Predeceased recently in April by her beloved husband of 65 years, Robert “Bob” Ferguson.
Left to mourn her passing are daughter Kerri (Chris “Patsy” Patacairk) and grandson Zackary “Zack”.
Also survived by her brothers Bob and Lee Roberts, both of Sarnia, and by several nephews, nieces and their families.
Also predeceased by two infant sons and one sister.
Shirley was born in Sarnia but – as all of her close friends know – her age was always a well-kept secret and, in her honour, it will remain that way!
Shirley was a strong and independent woman who lived life to the fullest and was always ahead of her time. As an active member of the Kincardine Knox Presbyterian Church, she served there in many different capacities. She was also the welcoming face to students at W.E. Thompson for several years, where she made many life-time friends. The Ferguson front porch was the place to be during the Kincardine Scottish Festival or Saturday night bagpipe parades. Shirley’s door was always open and she was considered a second mother to all of Kerri’s friends. She will be greatly missed by her bridge groups, the Knox Church family and all who knew her.
Due to present restrictions, a celebration of Shirley’s life will be held at a later date.
Donations in her memory to the Kincardine Knox Presbyterian Church or ¬¬¬¬¬the Kincardine Hospital Foundation are greatly appreciated as expressions of sympathy. Condolences may be made online at www.mackenzieandmccreath.com.
Arrangements entrusted to the MacKenzie & McCreath Funeral Home, 12 Queen Street, Box 248, Ripley, Ontario N0G 2R0; 519-395-2969.