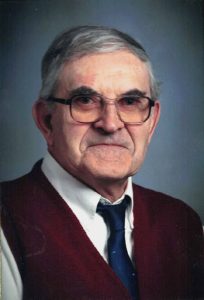 Milton “Scott” Walsh of Kincardine passed away at the South Bruce Grey Hospital-Kincardine, with family by his side, on Wednesday, Feb. 26, 2020, in his 87th year.
Left to mourn are his wife Ruby (née Timpson) Walsh; children Stephen Walsh of Lucan, Deb & Wayne Zuber of Walkerton, Sherry & Ross Myerscough of Sault St. Marie and John Walsh of Cambridge.
He will be forever remembered by his five grandchildren and seven great-grandchildren, his many nieces and nephews and his two sisters-in-law, Ethel Hickling and Jean & Lloyd Secord.
Scott was the last surviving member of his family and was predeceased by his parents Milton and Gertrude (née Scott) Walsh, one sister, three brothers and their spouses, son-in-law Paul Tremblay and great-granddaughter Ivy Myerscough.
Visitation was held at the Davey-Linklater Funeral Home in Kincardine from 6-9 p.m. on Friday, Feb. 28, 2020 and on Saturday, Feb. 29, 2020, from 12:30 p.m. until 1:30 p.m. The funeral service followed at 2 p.m. with Rev. Rob Hiscox officiating. Pallbearers were Stephen Walsh, John Walsh, Ross Myerscough, Wayne Zuber, Simon Myerscough and Earl Myerscough. Honourary pallbearers were Wayne Hartwick and Bill Scott.
Memorial donations to the Anglican Church of the Messiah or the Canadian Cancer Society were appreciated as expressions of sympathy.
Portrait and memorial online at www.daveylinklaterfuneral home.com.