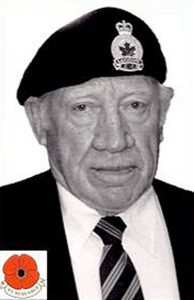 Robert (Red) Larsen, CPO (retired), of London and formerly Kincardine, passed away peacefully on April 23, 2020, at the University Hospital in London, at age 86.
He was born in Toronto, on July 2, 1933.
Red joined the Navy at an early age and was soon engaged in the Korean Conflict. After a period of time and experience, he achieved the rank of Chief Petty Officer first class in the diving trade, retiring after 30 years of distinguished service. Red then went on to DCIM (experimental diving unit) as a civilian manager and retired in 1993.
Red was very involved in his community and active in the Kincardine Legion, serving two terms as president (2007-2008 and 2010-2011). He was named Legionnaire of the Year in 2012 and received a life membership in 2015. As well, he was a member of the Kincardine Curling Club and was the quintessential sports fan.
He is survived by his wife Emma, and sons Randall (Tony McGrath) of Toronto and Kerry (Heather) of Hillsburg; as well as by his grandchildren Shannon and Cody.
Also survived by his sister-in-law Barbra Frampton, of Shawinigan Lake, B.C. and his half-sister Dianne (Bob) Arnott, of Toronto.
Predeceased by his former wife Joan Mitchell, son Lawrence Wayne, half-brother Gord Hull and half-sister June Parks.
Red will be lovingly missed and was respected by all who knew him. “Ready, Aye Ready”
Cremation has taken place.
A celebration of Red’s life will be held at the Kincardine Legion at a time to be later determined.

Crossing the Bar
Sunset and evening star, and one clear call for me!
And may there be no moaning of the bar when I put out to sea,
But such a tide as moving seems asleep, too full for sound and foam,
When that which drew from out the boundless deep turns again home.
Twilight and evening bell, and after that the dark!
And may there be no sadness of farewell when I embark;
For tho’ from out our bourne of Time and Place, the flood may bear me far,
I hope to see my Pilot face to face when I have cross’d the bar.
– Alfred Lord Tennyson – 1809-1892