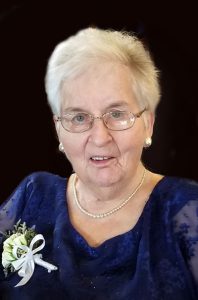 Mayme Isobel (Irwin) Wilkins died on Wednesday, Jan. 15, 2020, in the Kincardine hospital. She was 89.
Born Dec. 13, 1930, in Kinloss Township, she grew up on the family farm, and became a teacher.
She married Charlie Wilkins on Oct. 14, 1950. They owned and operated a dairy farm on the 12th of Ashfield for almost 30 years before moving to another farm just east of Amberley on Highway 86, where they had a farrow-to-finish pig operation for several years, and later raised laying hens.
Mayme was a member of Trinity United Church and later Ashfield Presbyterian Church. She worked with the ladies’ organizations, taking on leadership roles with the local group as well as with Presbyterial. She taught 4-H for several years, and worked as a Red Cross Homemaker.
She enjoyed oil painting, making parchment cards, working in her vegetable and flower gardens, playing cards, cooking, baking and sewing. She was always up for a meal at Jean’s Family Restaurant in Kincardine. Mayme loved to have her family come home and enjoy a meal around the table – for Christmas, Thanksgiving, birthdays or just because they were in the area for the weekend. She found joy in being surrounded by her children, grandchildren and great-grandchildren, teaching them how to bake pies and make cookies.
After Charlie died in 2012, she moved to Kincardine, living for three years at Forbes Lambton Court before moving to Trillium Court Seniors’ Community. She lived in the assisted living lodge for four years, enjoying the many activities and entertainment there, and spending Fridays playing Scrabble and going for lunch at Jean’s with her daughter, Liz. She moved to Trillium Court’s long-term care facility shortly before she died.
She is survived by seven children: Rev. Barbara Wilkins and friend Roy Bortolotto, of Rocanville,
Saskatchewan; Bill and wife Joanne, of Lucknow; Larry and wife Janet, of Ashfield Township; Jack
and wife Sharon, of Ashfield Township; Janet and husband Allan Peck, of Belle River; Liz and
husband David Dadson, of Kincardine; and Ken, of Kitchener.
Also survived by 15 grandchildren and 12 great-grandchildren; brother-in-law Herb Wilkins and his wife Marie, of Chesley; sister-in-law Grace Wilkins, also of Chesley; and many nephews, nieces, cousins and friends.
Besides her husband, she is predeceased by her parents William John and Stella Irwin, brothers Calvin
and Lloyd Irwin, and sister Ruby Riach.
Visitation was held at the MacKenzie & McCreath Funeral Home in Lucknow from noon to 2 p.m. on Friday, Jan. 17, 2020. A memorial service followed at 2 p.m., with Rev. Barbara Wilkins officiating and accompaniment by Andrew Fraser, of Kincardine. A reception was held at the Lucknow Legion following the service.
Spring interment Greenhill Cemetery, Lucknow.
Memorial donations to Knox Presbyterian Church – Kincardine, the Kincardine and Community Health
Care Foundation or Huron Shores Hospice would be appreciated as expressions of sympathy.
Condolences may be made online at www.mackenzieandmccreath@gmail.com.