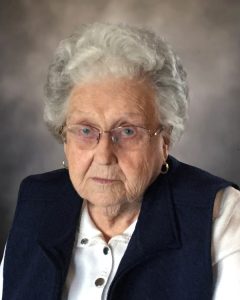 Evelyn May Sheane (née Kerr) passed away peacefully at the South Bruce Grey Health Centre-Kincardine, on Tuesday, June 9, 2020, in her 89th year.
Dear mother of Kimberly Sheane (Steve Cameron) of Kincardine and Karen (Donald) Fair of Scottsdale, Arizona.
Cherished and beloved grandmother (Nanny) of Michael Fair of Edmonton, Nicole Fair of Phoenix and Sheane Fair of Scottsdale, Arizona.
Beloved sister of Gordon Kerr and dearly missed sister-in-law of Eileen Kerr, both of Sydney, Nova Scotia; and Betty Jean (Ron) Finlay of Goderich.
A loving aunt to numerous nieces and nephews.
Predeceased by her parents Daniel and (Burton) Gladys Kerr of Sydney, Nova Scotia; her husband Weir Alexander Sheane, of Kincardine; sister Eileen Kerr and brothers Lloyd Kerr and Rodney Kerr, all of Sydney, Nova Scotia.
Evelyn was born in Sydney, Nova Scotia on Sept. 4, 1931. After high school, Evelyn remained in Sydney and worked as a teller in a bank, where she met her husband Weir. Together they raised two daughters in Kincardine and were very involved in church activities, local politics and community organizations.
Once her daughters were in school, Evelyn worked at the Kincardine Royal Bank before transitioning to the Bruce Municipal Telephone System where she worked for 20 years, retiring as the treasurer in 1992.
Many happy winters were spent in Arizona during their retirement years, while summers meant the joy of having Michael and Nicole visit from Arizona, with time spent on the farm, swimming, boating and going to Camp Hermosa.
A private memorial service will be held at the Lighthouse Fellowship Baptist Church with Pastor Stephen Gordon officiating.
Interment at the Kincardine Cemetery.
In lieu of flowers, memorial donations to the Lighthouse Fellowship Baptist Church’s Building Fund in Kincardine would be appreciated as expressions of sympathy.
Portrait and memorial available online at www.daveylinklaterfuneralhome.com.