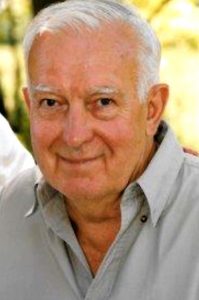 William “Bill” Delbert Splan passed away peacefully, surrounded by his family, at the Kincardine hospital on Sept. 29, 2020, at the age of 87.
Beloved husband of the late Mary “Evelyn” Moffat of Teeswater.
He was the son of the late Clara Harriet (née Caswell) and William Delbert Splan, of Kincardine. Dearly missed by surviving step-children Janet Harrison (late Rick) of Lac La Biche, Alberta; Cathy Fleming (John) of Allenford, Ontario; Wade Gibson (Janice) of Amberley, Ontario; Glen Gibson (Rita) of Edmonton, Alberta; and Mary Gibson of Kincardine.
He will be fondly remembered by several grandchildren, great-grandchildren, nieces, nephews, friends and neighbours.
Predeceased by his brother John (Jack) and sisters Marjorie (Jean) and Hilda.
Bill’s family and many friends will attest that he lived life to the fullest, never shied away from an adventure, and loved to travel in earlier years. A man who was always involved in the community, he sponsored minor soccer teams and was involved with local service clubs. For many years, Bill operated a successful flooring business well-known in the Kincardine area as “Splan the Carpet Man”. A life-long resident, Bill loved to relate stories of local characters and history and has contributed memorabilia and photos to many of the historical collections to be found around town.
The family would like to extend many thanks to Dr. Murray, Dr. Gunaratne and the emergency staff and palliative care staff at the Kincardine hospital for their kindness and care to Bill and his family during his short stay.
A private graveside service in Kincardine will be held at a later date. A celebration of his life will also be held at a future date.
The family would like to request that any donations made in memory of Bill be directed to the Huron Shores Hospice, SBGHC – Kincardine or the Canadian Cancer Society. Condolences can be made on-line at www.mackenzieandmccreath.com.
Arrangements entrusted to the MacKenzie and McCreath Funeral Home, 595 Campbell Street, Box 36, Lucknow ON NOG 2H0; 519-528-3432.