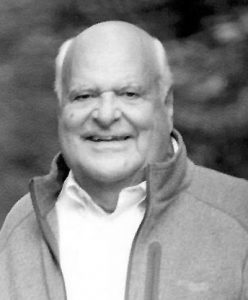 With broken hearts we share the news of the passing of our beloved husband and father Ross Klopp on Sunday, Jan. 12, 2020, at Collingwood General & Marine Hospital.
Loving husband for 66 years to Mary Lou (nee Berlett) Klopp.
Amazing father and friend to Sue Klopp and Janice (Craig) Maw and the late William “Billy”Klopp.
Loving Gramps to Emily and Will Maw.
Predeceased by his parents Len and Ora Klopp and his brother Bill Klopp.
Ross will be remembered by his sister-in-law Donna Sills, nephew Michael Klopp and niece Kristyn Clairmont and their families.
Ross lived a full life, never putting anything above family. The motto that he proudly promoted was “family first”. He lived for his family and summers since childhood at his beloved Bruce Beach where he was bestowed with an immeasurable wealth of lifelong friends.
Winters were spent on the hills at Osler Bluff Ski Club in Collingwood where, as an early member, he was fortunate to be able to participate in the sport he so loved well past his 80th birthday. To pursue this passion, Ross and Mary Lou moved to Collingwood where they could ski every day. It also allowed a renewal of his joy of curling and the friendships made at the Collingwood Curling Club.
Ross was a long-standing member of the fashion industry, starting with Ross Klopp Limited and then transferring to Frame Neckwear where he enjoyed working with his brother Bill. Upon retirement from Frame, Ross was known in business as “The Tie Guy” manufacturing specialty neckwear. This name followed him through life with much affection.
Family and friends were received for visitation at the Fawcett Funeral Home – Collingwood Chapel on from 6-8 p.m. on Friday, Jan. 17, 2020. The funeral service was held at First Presbyterian Church, 200 Maple Street, Collingwood at 1 p.m. on Saturday, Jan.18, 2020.
A celebration of life will be held at Bruce Beach in the summer of 2020.
In lieu of flowers, donations to the Collingwood General & Marine Hospital Foundation or First Presbyterian Church were appreciated as expressions of sympathy. Friends may visit Ross’ online Book of Memories at www.fawcettfuneralhomes.com.